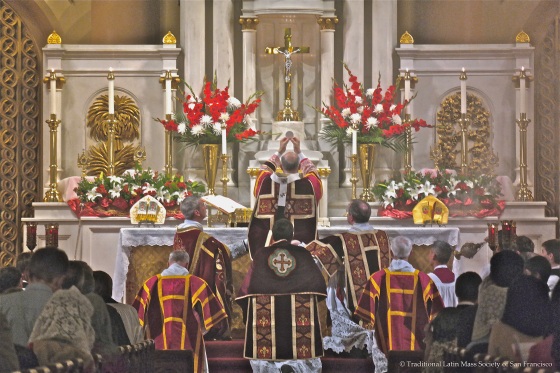 On Sunday September 14, 2014, on the Solemnity of the Exaltation of the Holy Cross, more than four hundred worshipers filled the pews of Star of the Sea Church for a historically momentous liturgical event. On that evening, Archbishop Salvatore Cordileone celebrated the first Pontifical Mass (Missa Pontificalis in Latin) in San Francisco for almost sixty years.

The Pontifical Mass was celebrated in honor of the seventh anniversary of the implementation of Pope Emeritus Benedict XVI’s motu proprio  Summorum Pontificum, which affirmed that ceremonies and rituals like the Pontifical Mass are still valid and an important part of the Church’s rich heritage. The Mass, which was advertised as “one of the treasures of the faith,” was coordinated by the Traditional Latin Mass Society of San Francisco with music by the Golden Gate Boys Choir.

The Pontifical Mass included elaborate rituals celebrated according to the Caeremoniale Episcoporum (Manual of Episcopal Ceremonies) from 1916. The gestures, the number of ministers, the details of the vesting of the celebrant and the ministers, and the order of the Mass were followed according to how they are spelled out in that manual.

The Pontifical Mass is the Mass of a bishop, and all the highly regulated, complex details of this Mass are fraught with meaning. Taken together, the details are designed to make up a system of visible, material signs that point to the invisible, spiritual realities of a bishop’s office. As is true about how we come to understand many important things, we don’t grasp the importance of something as complex as a Pontifical Mass without having been taught what it means. The goal of this post is to explain some of the rich meaning of what occurred that night.

Why is it called a Pontifical Mass?

It is not commonly understood, but the adjective “pontifical” does not refer exclusively to the pope. A cardinal, archbishop, bishop or abbot is also referred to as high priest, or “pontiff.” The celebrant of a Pontifical Mass is said to be “pontificating.” The related term “pontificals” refers to all the vestments and ornaments the bishop wears and uses when he pontificates at the Pontifical Mass.

What does “at the Throne” mean? 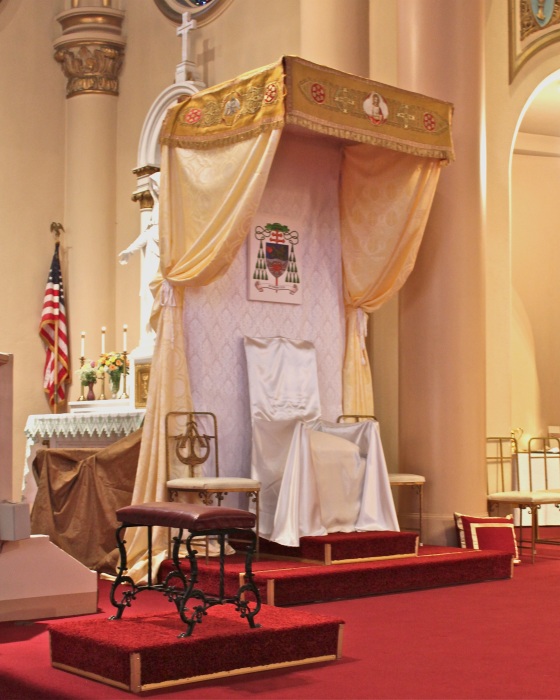 The privilege of “Pontificating” on the Throne is only allowed to all Cardinals outside of Rome, to the Pope’s Apostolic Nuncios and Legates in the territorial jurisdiction they are assigned, and to Bishops and Archbishops within their Ecclesiastical Jurisdictions.

Because the archbishop was visiting Star of the Sea and did not celebrate at his cathedral, it was necessary to construct a temporary throne for use during the Mass on the gospel side of the altar. The archbishop’s shield was mounted behind the chair with a gold embroidered baldachin (canopy) above it.

Why all that vesting at the Throne?

An unusual and elaborate aspect of the Pontifical Mass was the ceremony called “vesting at the throne.

Before the start of the Mass, the pontificals were laid out on the altar. Servers ceremoniously removed each of the pontificals in turn from the altar, and waited in line to present them to the archbishop. Sacred ministers helped vest him. The pontificals included the bishop’s pectoral cross, ring, and crosier, which bishops always use, plus buskins, an amice, an alb, a cincture, a stole, a tunic, a dalmatic, and a chasuble. Two types of mitre are also used during a Pontifical Mass, along with a gremial and gloves.

The vesting ceremony is rich in symbolism of the bishop’s humility. It reminds the bishop and everyone present of Christ’s words to St. Peter after His Resurrection to indicate how Peter would die, when He said to St. Peter that one day Peter would not be able dress himself and go where he wished but that someone else would dress him and lead him.

Amen, amen I say to thee, when thou wast younger, thou didst gird thyself, and didst walk where thou wouldst. But when thou shalt be old, thou shalt stretch forth thy hands, and another shall gird thee, and lead thee whither thou wouldst not. – John 21:18

When the celebrant is divested of the vestments he wore when entering the church, he is symbolically stripped of the trappings of the world and loses his personal identity. When he is then subsequently ceremoniously vested in the pontificals, one after another, the bishop is clothed in the new man of which St. Paul speaks in his letter to the Ephesians and is covered from head to foot in the High Priesthood of Jesus Christ.

If so be that you have heard him, and have been taught in him, as the truth is in Jesus: To put off, according to former conversation, the old man, who is corrupted according to the desire of error. And be renewed in the spirit of your mind: And put on the new man, who according to God is created in justice and holiness of truth. – Ephesians 4:21-24.

One bishop said that the first time he was being vested for Pontifical Mass, he felt like a lamb being dressed for slaughter.

Bishops at Pontifical Mass wear the vestments of a subdeacon (the tunic), deacon (the dalmatic), and priest (chasuble) because, as medieval liturgist William Durandus wrote, in the bishop “the degrees of all the Major Orders are most eminently present.”

Each pontifical has its own prescribed prayer. For example, as he was being vested in the buskins, the archbishop prayed the following.

How long since the last Pontifical Mass in San Francisco?

Beginning when His Grace was installed as Bishop of Oakland in 2009 and continuing after his appointment as Archbishop of San Francisco in 2012, Archbishop Cordileone has celebrated Pontifical Masses in several other locations around the archdiocese: at the Oakland apostolate of the Institute of Christ the King Sovereign Priest in St. Margaret Mary Church in 2009 and 2011, and at St. Monica Church in Moraga to celebrate the official opening of the Carmel of Jesus, Mary and Joseph, a new foundation of the Discalced Carmelites in the Diocese of Oakland in 2012. For several years, the archbishop has also celebrated Pontifical Masses on the last day of the Napa Institute’s Conference at The Meritage Resort in Napa. His Pontifical Mass on September 14, 2014, was the first such Mass Archbishop Cordileone celebrated in the city of San Francisco.

When Fr. Mark Mazza, former Star of the Sea pastor, was asked recently if he knows the date on which the last Pontifical Mass was previously celebrated in San Francisco, he replied, “The reformed Mass with its new order would not appear until 1970 in the United States,” but, in the United States, changes to the Mass began at the end of November 1964, on the First Sunday of Advent. For this reason, Fr. Mazza added, “I would presume that the last Solemn Pontifical Mass using the 1962 Missale Romanum and the Pontificale Romanum was in 1964, now over fifty years ago.” Fr. Mazza added that since even before the Second Vatican Council, Pontifical Masses “were not always that common,” the time elapsed since the last Pontifical Mass in the city could easily have been closer to sixty years.

How did this event come about?

The planning for this year’s Pontifical Mass began almost exactly a year earlier. During a dinner on September 13, 2013, which Fr. Mazza and the members of the Traditional Latin Mass Society of San Francisco hosted at Star of the Sea for Archbishop Cordileone, the Traditional Latin Mass Society asked the archbishop if he would celebrate a Pontifical Mass at the parish. Eventually the date was fixed to coincide with the weekend of the archbishop’s pastoral visit to the parish this year, which occurred September 13 through 15. 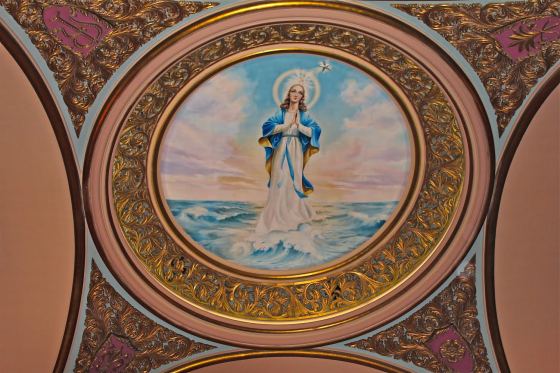 What does it all mean?

In his homily, Archbishop Cordileone reminded the mass goers to keep in mind that the beauty of the Pontifical Mass should not be an end in itself. Alongside of the love of God that is fostered during the celebration of the Eucharist in such a reverent ceremony in such a beautiful setting, our love of our neighbor must also be fostered.

Following are some excerpts from Archbishop Cordileone’s homily:

Our spirituality and stewardship are the practical way we live our Christian faith in the world.  Our faith is not to be left inside the walls of this beautiful church. We are all awed and inspired by the beauty of the ceremonies here in the celebration this evening. . . .. We all love this liturgy, but if it doesn’t make a difference, it becomes nothing more than a neat hobby. A neat one. But a hobby.  It is meant to transform us into a deeper love of Jesus Christ.

Here we experience the beauty of Jesus Christ in the beauty of the Church’s liturgy so that we might recognize the beauty in those in the world around us, in those who are poor. Sharing those gifts with them, in works of charity, works of justice. We have ample opportunity here in our community. Here in this parish, right across the street, is a very good and powerful ministry to women who find themselves in crisis situations*. Mothers with young children or expectant mothers. Sharing our gifts. Understanding their needs. [We need] to see the beauty of Jesus Christ in them and to lift them out of their moment of crisis, out of their own fear, so they might encounter the Jesus who we encounter here and who we share with them.

In 1925, an article the “Test of Beauty,” was published in Columbia magazine with perhaps the most-eloquent praise possible for the beauty of the Pontifical Mass — from an Anglo-Catholic convert. Ralph Adams Cram, the famous architect who planned the Neo-Gothic redesign of the Cathedral of St. John the Divine in New York City, wrote as follows: “What was the greatest synthesis of beauty, made operative through art, that man has ever achieved? The answer is very simple: it was a Gothic cathedral of the thirteenth century during a Pontifical High Mass . . . Every art raised to its highest point was here brought into play in one place and associated in absolute union with the greatest beauty of thought, emotion, and action that have ever been the possession of fallen man. . . . And all were for the exposition and realization of the supreme beauty of spiritual things; the durable love of God for His children through the Sacrifice of Calvary, eternally renewed upon the altar, and the veritable presence of His Spirit through the miracle of the Mass.” 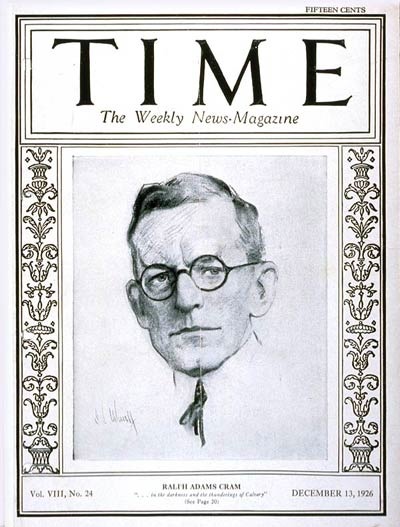 The Pontifical Mass was celebrated on that balmy September evening in that beautiful church at the northwest tip of the San Francisco peninsula very much the same way as Pontifical Masses were celebrated around the world before the Second Vatican Council. Star of the Sea Church is a parish church that was finished in 1917 using the best materials the working-class parish could buy, during Cram’s lifetime, and while it is not a cathedral and its arches are Romanesque rather than Gothic, it was an appropriately lovely setting for this modern-day Pontifical Mass.

* Star Community Home for women in crisis situations is a project of Catholic Charities CYO that is located in the former convent of the Sisters of St. Joseph of Carondolet at Star of the Sea. Archbishop Cordileone is the Director of the home’s Board of Directors.

You can view the complete homily here and see many more photos of the Pontifical Mass here, thanks to the work of the Traditional Latin Mass Society of San Francisco.